Extending the Reach of HbbTV TA to Set-top Box Markets 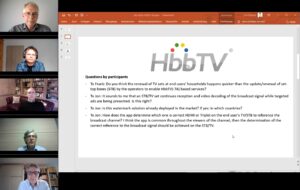 Reaching a large number of viewers is one of the key issues for advertising. HbbTV has recently updated its specification for set-top box markets, “Application Discovery over Broadband” to integrate with HbbTV Targeted Advertising (TA). In this webinar, you hear about the target markets for this update and about how the two solutions fit together. You also hear about the components needed to deploy the combined solutions and the work of a task force in Germany aiming at such a deployment in practice. The presentations are followed by Q&A.

Presenters’ Biographies
Frank Heineberg is Senior Manager programme distribution at CBC / RTL Deutschland since 2014, after having already been active in other functions at RTL and CBC since 1991. He is working on various new technology projects and represents RTL in standardisation bodies. Frank is also member of the HbbTV Steering Group.

Jon Piesing is the Vice-Chair of the HbbTV Association. He is also Chair of the Technical Module of the DVB Project and the Steering Committee of the CTA Web Application Video Ecosystem (WAVE) project. Jon, who has been a leading figure in the development of specifications for integration of TV and interactivity for more than 10 years, is Director, Standardisation for TP Vision, the manufacturer of Philips TV sets.

Joe Winograd is the Co-founder and Chief Technology Officer of Verance Corp and has directed the company’s development of watermark solutions since 1995. He led Verance’s efforts to establish the company’s technology as the industry standard for movies, TV and music and has guided its deployment in hundreds of millions of consumer electronics and entertainment products.

Klaus Merkel joined rbb in April 2021 and actively contributes to the development of the standard and its practical application. From 1991-2021 Klaus had been employed at IRT where he was engaged in working groups for the definition and market introduction of open and interoperable platforms for interactive TV. He was deeply involved in the launch phase of HbbTV in 2009.

A recording of the 1-hour webinar is available on our YouTube channel. The presentations can be downloaded as PDF documents: Frank, Jon, Joe, Klaus

Please select an appropriate option below whether you’re a member of either HbbTV or AKTV. Exclusive pricing is offered to members. Please note that membership confirmation is required prior to registration confirmation. Prices shown are w/o 21% VAT.